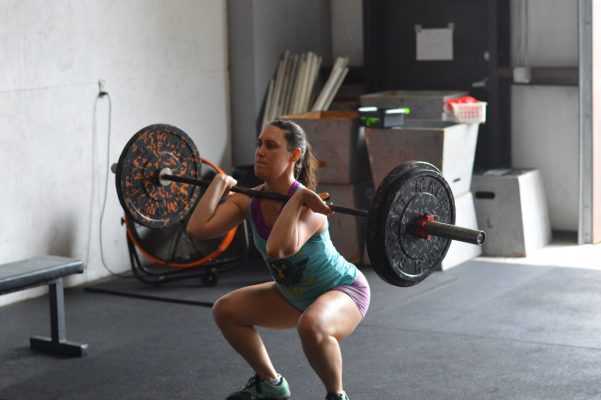 Michelle is a CrossFit L1 Trainer, a Ft. Worth native, a foodie, and a bookworm.  After being introduced to CrossFit by her sister in 2014, Michelle never looked back.  Although she does not come from any kind of an athletic background, (Some yoga and Pilates classes, a number of attempts at running, and a few sessions with a “Globogym” personal trainer about sum it up.) and much to her surprise she fell in love with the sport of fitness.  It changed her life.  After just a few months of attending CrossFit classes twice a week she began to see improvements in her appearance and weight-loss goals.  Just a few months later she realized there were a growing number of things that she could do that she never imagined she would be able to do.  About this time Michelle realized that she had become truly invested in the CrossFit community.  She was hooked and wanted to share her passion with others.

As her knowledge and experience in the sport grew, Michelle realized just how many aspects of her lifestyle had been positively affected by her new passion.  The most dramatic change was in the area of nutrition.  In 2015 Michelle participated in her first Whole Life Challenge.  It opened her eyes to how important nutrition was to almost every aspect of life.  As a career fine-dining server and self-proclaimed foodie, she was certain that one eight-week challenge would not be enough to change her lifestyle.  However, through that challenge she discovered that even she could change the way she ate, and she saw how dramatically food affected her performance.  This ignited her desire to learn more about how to properly and deliciously fuel her body.  In 2017 Michelle and her husband, Jeremy, moved to Houston, and she began the search for a new home box.  A couple of months, and 8 gyms later, she found CrossFit West Houston and jumped right in.  In 2018 Michelle decided to take the next step in sharing her passion and passed her CF-L1 test.

Michelle adores the CFWH community and is excited at the opportunity to share her passion for fitness and food with those around her.