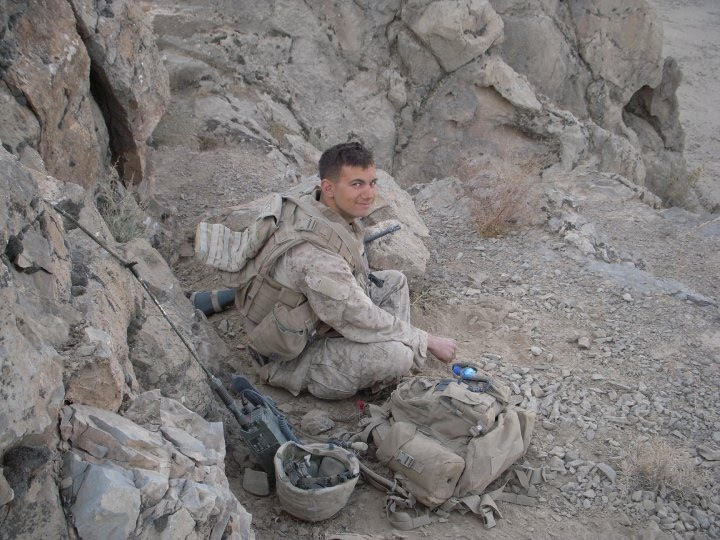 My PTSD Story By: Matt Spaid

I joined the Marine Corps as soon as I graduated high school in June 2006, and I wouldn’t trade a second of it. I went infantry, and after the various schools I was assigned to 3rd Battalion 4th Marines, Lima Company, 3rd Platoon. We were the most combat deployed battalion in the Marines for OIF and OEF, and we were sure to train for it. I am a firm believer in the saying, “sweat more in training, bleed less in war”. My first deployment was to Iraq, and our main mission was to win over the hearts and minds of the people since the war was winding down. There was still the occasional threat, but for the most part it was mission accomplished. However, the next deployment would be to Afghanistan.
We knew this deployment would be much different. Our area of operations was the City of Now Zad. What was once a thriving village was now a ghost town due to the Taliban. They used it as an area to gain experience fighting Marines and they kept safe by placing an IED belt to divide the territory between themselves and coalition forces. We launched an offensive operation known as Cobra’s Anger and moved past the IED belt and caused the Taliban to withdraw. We cleared countless IED’s, and helped move the citizens back into their homes in Now Zad and tried to assist the people as best we could.

Before I knew it, the deployment was over and just about a month later I was back in the states and out of the Marines. I had no transition time, and was even denied unemployment. Luckily, I went straight to work in the oilfield and was blessed with having a great crew to work with as I was going through a difficult transition. However, there was no denying that I was suffering from PTSD, and I wasn’t sure what to do.
I began having audio/visual hallucinations, recurring nightmares, flashbacks, and insomnia. I didn’t want to go anywhere new or crowded. I was constantly thinking of how to set up defensive positions, and I couldn’t stop searching and assessing for a possible threat. I couldn’t figure out how to feel safe and switch off my combat mindset. I was dealing with survivor’s guilt from losing my friend in Now Zad and from not being there with my Marines on the following deployment when my Platoon Sergeant was killed. Some of the guys in my platoon were also wounded. I felt as though I should have been there.
Luckily, I sought help, but it was only after I had done damage to my family and I had to figure out how I could repair it. I began speaking with a counselor, and I also started lifting at a CrossFit gym. CrossFit helped me tremendously. I was able to begin to socialize and feel supported by the positive community that is often found in CrossFit. I eventually began coaching, and helping others was a great way to help me find peace with my trauma. This seemed to be my answer for getting my life back in order. I worked through a lot of my trauma with some different techniques that my counselor had researched through PTSD (including EMDR therapy), and I began meditating and doing yoga. I would be able to get my aggression out in the gym, and I was able to learn to trust others and be comfortable in new environments. I started to rebuild my relationship with my family, friends, and a higher power.
I decided to use my GI Bill and go to school in order to become a Firefighter, and was eventually hired by a combination department in Oklahoma. I felt like I was once again serving society for the greater good, and I couldn’t have been happier. It was a small, but busy department, with about 70% of our call volume being on the medical side. We worked a lot of grass fires, a lot of wrecks, some structure fires, and worked hard to educate the public on fire safety and the need for a larger department. One wreck involving one of our Police Officers affected me deeply and seemed to resurface my PTSD. He was well known in town, and would often hang out at the fire station with us. He actually reminded me a lot of my former squad leader in Iraq. One morning in December, his vehicle was side swiped by a garbage truck and he was pinned on the side of the highway. With our small crew, we worked for over an hour cutting him out of the mangled vehicle and loaded him on the mediflight, not knowing if he was going to live or die. He made a miraculous recovery, but I couldn’t shake the feeling that I had somehow failed him. Many people praised me and my partner for doing a great job, but we both still felt as though we could have somehow done better. I was constantly reminded of the wreck driving into the station every day, since I passed by the tracks by the side of the highway.

I began to have nightmares again, and was beginning to get back into a combat mindset. Only now, I also had PTSD from being a first responder. I eventually switched departments, but that didn’t work either. I couldn’t sleep, and I was constantly being triggered by sounds and going into “autopilot”. I couldn’t decipher who was friend or foe, and I checked myself into the VA inpatient clinic for mental health. This only seemed to make matters worse. I was put on medication that was giving me horrible side effects, and I couldn’t function. I was eventually stable enough to leave, but now I had lost my job at the fire department from being in the hospital for so long.
My PTSD was wrecking havoc on my life and my family. I couldn’t help my wife take care of our son. Every time a siren or some sort of tone went off, I would be triggered and go into “work mode”. Sometimes it was autopilot for Marine, and other times it was Firefighter/EMT. I even cleared my parent’s attic in the middle of the night, thinking there was a sniper hiding there. My head hurt horribly, and every time I blinked my eyes I either saw an explosion or the face of someone I had worked on as a Firefighter/EMT.
I was trying to get help everywhere, but no one knew what to do for me. Thankfully, my family found out about Camp Hope, and we began to head south. When I first arrived, I was incoherent, paranoid, and emotionally numb. By sticking through some hard times and working with my fellow veterans, I was able to make a huge turnaround and find a new normal. I’m no longer on any medication (I prefer to use therapeutic methods), and I have some new tools to help deal with my PTSD. Camp Hope has provided me with a strong support system and community that I can always rely on when I need help. My goal is to spread awareness about PTSD and help other veterans and first responders find help, and also help them realize it’s OK to ask for help. Many people, including myself, fall down into the deep hole that is PTSD, and we just need some help getting back up again. Camp Hope provided that help for me.

3 Comments to "My PTSD Story By: Matt Spaid"