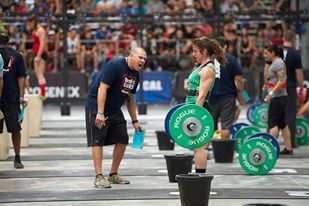 I’m a lifelong science nerd and athlete! The nerdy part I’ve fed with my undergraduate training in biology which turned into a dozen years spent teaching high school kids about chemistry and biology; the athlete part I’ve developed through participation in several competitive sports since I was a kid!

A couple friends from my bike racing days were talking about something called Paleo back in 2009, and I decided that I was up for a challenge. I read The Paleo Diet for Athletes and committed to starting in January 2010. The rest is history!

Currently, I’m training for Olympic weightlifting though the past few years were spent CrossFitting. Prior to that, I spent almost a decade racing mountain bikes.

I head to the gym at about 3 and spend about 30 minutes mobilizing and warming up, then about 2 hours lifting—with lots of breaks in between.

Since I work out about 3 hours after lunch, I don’t do anything specific for pre-workout. I do better on a mostly empty stomach, so as long as I’ve eaten a proper breakfast and lunch, I’m good to go. Post-workout, I usually have a small amount of meat and some carbs like sweet potato. I keep it pretty simple with protein and carbs and pretty much shy away from shakes and supplements unless I’m in competition season.

My ebook, The Paleo Athlete, is really a comprehensive look into how beginners (athletes new to Paleo or folks eating Paleo who want to start training for a sport) can best fuel, whether they’re into power sports, high-intensity training or endurance events. It’s got everything from basic science to practical things—like how to maximize your busy schedule and cook nutritious food and how to prep for an event. It’s also got 30 protein- and carb-packed recipes.

The Whole Athlete seminar that I present along with Dallas from Whole9, is more comprehensive than just nutrition. We talk a lot about fueling, but also address some really important aspects of training that athletes often miss or feel lost about, such as goal-setting, sleep and dealing with injuries.

Dallas and I were bantering back in the fall about all things performance related, and it’s something we both like to geek out on so it seemed like a natural fit to offer a seminar that’s a natural extension of the Whole9 Foundations seminar, catered more specifically to the performance crowd. As we talked about it more, we knew it needed to cover more than just food, because while that’s the foundation, there are lots of moving parts that make a successful athlete.

Even if you never see yourself competing formally, you can still benefit from attending. If your main focus is to train so you can be badass at life, you’ll learn how to set goals that match that pursuit then fuel yourself to get there. We see lots of folks who’s priority it is to compete against themselves in daily training, but for different reasons, their training isn’t going as well as it once was. Our goal is to give anyone—regardless of level or sport—the tools to improve via nutrition, sleep and training.

The million dollar question! I think there’s a combination of factors going on here. First, a lot of folks do Paleo incorrectly when you consider the nature of their training, mostly through doing lots of high-intensity training on a very low-carb approach. Then, when performance tanks, they throw the baby out with the bathwater and decide Paleo sucks.

Second, some high-level athletes have publicly stated that they don’t do strict (meaning low-carb) Paleo, so most folks dismiss the whole concept.

I maintain that proper modification of Paleo, with the emphasis on whole, nutrient-dense, anti-inflammatory foods can most certainly be the foundation upon which a successful athlete is built. If you add in adequate carbs and proper competition nutrition to a basic Paleo approach, it can be wildly successful. Pick the goal and training modality, then adjust from there.

Anything with carb-dense veggies (yes, even white potatoes), safe starches (depending on individual tolerance) and plenty of protein. One of my favorites for pre-workout is Breakfast Sausage Scotch Eggs. Make them in a double batch and you’ve got a hand-held, portable bomb of protein and healthy fat. For a tasty hit of post-workout carbs, I love this Apple Cranberry Sweet Potato Bake. It’s got just the right amount of sweet with a hint of tang and is easy to make ahead of time.